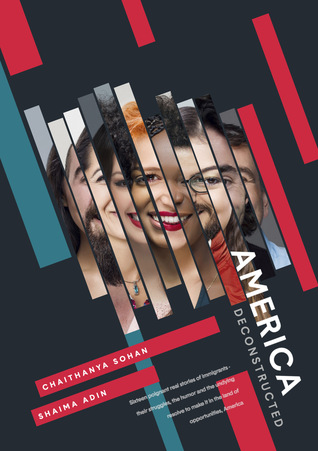 Naseer was nine years old when he escaped Taliban and fled Afghanistan with his mom and siblings. His story, “There are some people who are coming to take me away”, chronicles the resilience of a nine year old boy as he traveled from Afghanistan to America in his quest for the American dream. “I saw a ripe mango I’d like to pluck” showcases the love story of Chidiebere and Ifeyinwa, which begins in rustic Nigeria and culminates into a life in America. Their journey chronicles their struggles with language, culture and being African in America. In the story “ Kosovo, really…cool”, Lisian takes us through his journey to America and often being asked his identity in spite of being white. In the story “I am exotic, mocha, P-diddy”, Parag describes his journey from a young sixth grader who hid his attraction to boys in conservative India to embracing his sexuality in America. America Deconstructed follows the journeys of sixteen immigrants who have left their home countries in search of the American dream. The stories combine humor and emotions as the protagonists maneuver cultural differences, accents and uncomfortable situations while feeling a sense of belonging in America.

In a time when immigrants are often seen as dangerous, people that should be avoided, people who shouldn’t be accepted, this book shines a light into what their lives are actually like. From the sample that I’ve read, I found it insightful and interesting. The rich voices and cultures that are introduced show a different side to immigrants than is often painted of them.

We often assume that these people want to come to different countries to live off benefits and not do anything, but the truth is that most people leave their homes because they’re scared. They need to. And when they reach a new land, they settle down, they work hard and they try to contribute to a society that is big and scary to them.

Each story is different and I found it really interesting to read a story of someone who went to America in the 80’s and how much the attitude towards immigrants has changed over the decades. Another thing I found interesting was how some of them thought that America was home now and others still felt like their country of origin was still home, even if they’ve lived in America for several years.

I’m very intrigued to read the rest of the stories and see if the themes I’ve seen so far translate to all the stories: the hope of a new life, the struggle to find themselves in a strange place, and the determination to continue traditions despite living in a new land.

This is a collection of stories that couldn’t be more appropriate for our times and I hope that everyone reads it.

Be sure to support this project when the crowdfund goes live on the 13th! Follow the project at the social media links below.