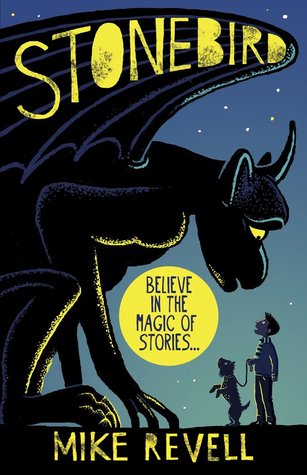 I received a copy of this book from Quercus in exchange for an honest review.

The importance of memories and the magic of stories take flight inStonebird, a haunting and heartfelt story of family, friendship and finding one’s way in the world.

When 10-year-old Liam’s family moves to be near his grandmother who is suffering from dementia, he’s left to navigate his new neighborhood, school and grandmother’s illness all by himself; His mom regularly loses herself in a bottle of wine, and his sister sneaks out to who knows where shortly after the “wine o’clock hour” as they’ve come to call it, strikes. And it isn’t easy.

Liam struggles to remember his grandmother before she took ill and turned into a demon who eats birthday cards; find a way to return a smile to his mother’s face; and ward off the bullies at school. The one place he seems to find solace is a rundown church where he finds an over-sized gargoyle that keeps drawing him in. After learning that they were created to protect people from demons and evil spirits, he can’t seem to shake the image of the old stone bird and its presence weaves itself into the stories Liam tells himself and others, so much so that Liam starts to believe that it might be alive. Mrs. Brown, the new teacher in town, maybe the only other person who knows the truth.

Shy Liam’s only means of confidence during shared story time is to tell tales of the gargoyle. His classmate mock him at first but are soon are captivated by his storytelling, and Mrs. Brown’s slight nods of encouragement fuel Liam’s belief in the bird and lead him to think that she knows a thing or two about the old bird herself.

As his grandmother’s health worsens and his mother becomes more distraught, his sister becomes more of a stranger to him, and the bullies’ threats become more relentless, the gargoyle become more real to Liam, seemingly bringing his stories to life, swooping in to protect and defend him in unexpected ways. But is the old stone bird really alive, or is it just Liam’s imagination finding ways to help him through a difficult time?

‘I loved this and read it in one sitting… it’s a really special debut, full of heart, hope and the power of storytelling.’ – The Bookseller

Stonebird is a beautiful tale. Once I’d picked it up, it was hard to put down. It’s one of those stories that is so effortless to read, it draws you in and before you know it, you’ve read the whole thing. It’s a very poignant tale about the struggles a family goes through when a loved one is slipping away from them, children lashing out as they try to come to terms with the bad things that are happening, and yet it also shows the strong bonds of love and friendship through difficult times.

When Liam discovers his sick grandma’s diary, he finds out about a gargoyle named Stonebird who is there to protect them, but when he starts telling stories about the gargoyle, things start to happen and although he didn’t believe at the beginning, he certainly does by the end.

There are so many aspects of this story to love. The caring teacher who tries to help Liam, the very real and heartbreaking portrayal of dementia and its effects, the friendship that can blossom in an unexpected way.

A magical tale for young children that is certainly one not to be missed. A stunning debut.

This book is available at the following links: Amazon UK | Amazon US | Book Depository

Mike Revell has always wanted to write for children. He studied Creative Writing at the University of Essex, followed by a postgraduate journalism course at Harlow College. Mike also has a passion for American Football, and when not writing fiction, he reports on the NFL for the Mirror newspaper. He lives near Cambridge with his girlfriend and their new puppy, Toffee. Stonebird is his debut.